The fleet for Sail Paradise 2021 has taken a step up with the recent entry of the 72-foot New Zealand flagged entry ‘Silver Fern’ by Southport Yacht Club (SYC) member, David Hows. 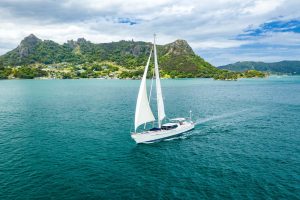 David Hows purchased the 72-foot steel yacht ‘Silver Fern’ in August 2020 after successfully campaigning his Beneteau 445 yacht ‘Ocean Gem’ out of the Southport Yacht Cub since 2014. David’s past successes have included; Sail Paradise Overall Champion in 2016 and 2019, back-to-back SYC Keelboat Club Championships in 2016 and 2017, PHS and IRC wins in the inaugural 2019 Brisbane to Hamilton Island Race, success in the 2018 Solo Tasman Yacht Race and Queensland Beneteau Cup trophies in 2015, 2017 & 2019.

after 9 years and the purchase of his new yacht Silver Fern, with Sail Paradise in 2021 as his first major regatta, following a planned 3-month refit and sail wardrobe upgrade. With the yacht currently based at Marsden Cove, 90 minutes north of Auckland in New Zealand, David also has to navigate the COVID-19 quarantine challenges to sail Silver Fern to Southport in November this year in preparation for Sail Paradise, before heading south for the Sydney to Auckland Yacht race in February 2021. 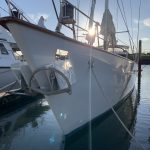 Silver Fern takes safety and reliability to the next level for David, with a robust steel 30-ton yacht, originally purpose-built as a Birdsall 60 in 1983, before being redesigned by renowned race yacht designer; Brett Bakewell-White, extended to 72 feet and re-launched in 2004 to go anywhere in the world, spending 2005 – 2016 circumnavigating the globe and visiting more than 70 countries.

David’s planned upgrades for Silver Fern include an expanded racing sail wardrobe, new rigging and electronics, to prepare Silver Fern for her next chapter as a comfortable but competitive, strong ocean racing, regatta and expedition yacht. When asked why Sail Paradise was the first regatta on David’s list for Silver Fern, he replied “Sail Paradise is one of my favourite regattas, and this will be my 6th edition. The regatta is first class, our club members are fierce competitors and great friends at the same time, and the welcome we turn on for visiting yachts and crews is second to none”.

Sail Paradise Major Sponsor has flipped to Qoin!
May 10, 2021